Bain selling out of Ibstock

Bain is selling its 47% stake in Ibstock. That’s not going to help the sector while it gets out the door, especially as they’re selling below the IPO price, but it had to happen at some point. IBST IPOed at 190p and closed at 186p last night so they can expect to get 175p give or take 5p. Considering Bain bought Ibstock from CRH for £414m in December 2014 then IPOed 50% of it for £310m or total market cap of £770m in October 2015, it has still done well out of the trade. The IPO price was 190p and IBST closed last night at 186p. Considering Bain clearly sees it as a good time to sell (probably at around 165p-175p to get the 47% out of the door depending on how much groundwork has been laid) we can expect some weakness in Ibstock, Forterra and Michelmersh shares but structurally nothing has changed – the brick industry is now on a sustainable footing seeing strong demand for its products and good returns with a bit of potential M&A around the edges.

Purplebricks officially launched in Australia. It was also reassuring to hear Michael Bruce again say that the business would become profitable “in the course of the year”. I’m expecting about £4m in profit this year with momentum clearly behind it in terms of doubling the number of instructions vs YE April 2016. The platform looks similar but fine-tuned for the Aussie housing market – greater emphasis on auctions is an obvious one. Purplebricks intends to charge a higher absolute fee in Aus at A$4,500 / £2,600 vs £800 in the UK. That higher fee reflects higher overall house prices – the average Aussie house is £360,000 while it remains at £213,000 in the UK. If that’s not intuitive you consider that the average Australian house is nearly 3x the size of a UK house (89sqm per capita vs 33 UK) and growing while UK houses are shrinking (as an aside, think of how much carpet that needs, hence Victoria’s rationale for Australian expansion, currently 20% of the business). The rollout into Melbourne and Brisbane makes sense to concentrate its marketing effort and budget before it continues across the country. Watch for a USA or Canadian expansion next. PB has refined its open day and auction operating so is ready to go.

Hybrid/online gets another boost

85% of home owners would consider an online agent according to netanagent.com estate agent comparison site. It’s not clear how it conducted its survey. If it was online, that would likely be a big distortion. In any case, it was overwhelmingly positive reading for hybrid agents: fee was the most important factor deciding on which agent to use, followed by personal recommendation and local knowledge. That last is the biggest challenge to hybrids. Most respondents expected an agent to take the photos and market on portals – I still find it surprising how many new online-only agents miss that and don’t hang around for long as a result.

Brexit data- choppy but still nothing to be scared of

You probably saw it a few days ago but the BoE reported that mortgage approvals in July hit 60,912, an 18-month low. That’s not surprising given the application would have gone in during the run up to the Brexit vote and just after the SDLT changes of April. More positively, the Nationwide housing index showed UK property up +0.6% in August instead of the slight fall that was expected. The PMI for manufacturing came in at 53.3 in August showing expansion compared to the 48.3 of July. Cebr business confidence came in at 109.7 from 105 in July. Lloyds business barometer went the other way coming in at 16 vs expected 29. ING’s Homes and Mortgages 2016 survey suggested 57% of Brits expect house price increases in their area, down from 70% last year but still healthy and the survey was conducted over the Brexit vote period. So still nothing to be afraid of and a few positives.

ARLA reported that the average letting agent in its survey had 184 properties on their books with 36 tenant applicants per branch in July. Those are inline with previous months. On specific Brexit questions, 70% of agents said no change in rents and 60% saw no change in the supply-demand balance. July is a bit old but some reassurance.

Countrywide’s rationalisation in London has started

It’s based around the John D Wood brand. Faron Sutaria is being absorbed (giving a total of 51 outlets under the brand) while six other brands are being relabelled as “Part of John D Wood & Co”. Consolidation is no bad thing but it seems like it’s being particularly painful for CWD. Especially when you consider the next point…

LSL Properties- one of the winners?

Here’s a boost for LSL Properties. I added its top two brands to my listings tracker. They are among the fastest growers in terms of listings for sale over the past month. Both top brands have added over 20 net listings per day over the last month. That’s as many as Purplebricks (meaning % growth is lower at LSL but still…). I find that strong, especially through the summer season. 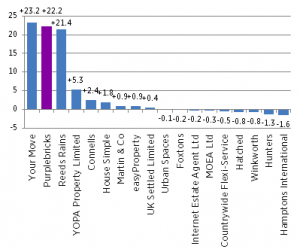 Lawmakers have introduced wording that would indicate a major tax change in the Finance Bill. The wording added at the committee stage moves gains on property from a capital gain to an income, for tax purposes. That could be a massive hike for property investors and second property owners. There’s no CGT on principal homes. Considering the upper band of income tax at 40% is twice the 20% of CGT (and the additional band is 45%), it’s a significant tax hike for personal owners of property. The Law Society is leading calls for the change to be reversed mainly on the fact it hasn’t had any public consultation or scrutiny coming at the committee stage. HMRC has commented that landlords will still mostly be charged CGT but the final wording remains to be seen.