Hybrid is winning the growth race

Since the Brexit vote, Purplebricks has added a net 27 properties for sale per day, putting clear sky between it and others by growing 5x as fast as the next fastest (YOPA) and 7x the fastest traditional agent (Connells). Notably,

Notably, Austin & Wyatt – a Countryside brand that’s trialling its “Flexi-Service” hybrid product has been growing at the same clip as Hamptons, a Countryside brand that isn’t. Foxtons (which profit warned “due to Brexit” remember) has added 2 per day on average. It’s clear PB is winning the growth race for sales at the moment.

The daily increase in the net number of properties for sale on the portals since 27 June 2016: 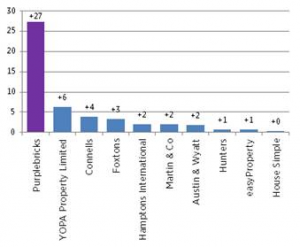 Here’s the same chart for rental properties. Hybrid hasn’t made the same inroads here with growth led by the traditionals. Foxtons is clearly prioritising lettings growth, adding a net 19 per day as it tries to hedge slowing London transactions. It was also probably easier to grow lettings as landlords rushed to it to purchase ahead of the April stamp duty increase on second homes. Notably, Belvoir was the fastest growing letting specialist over the past month. 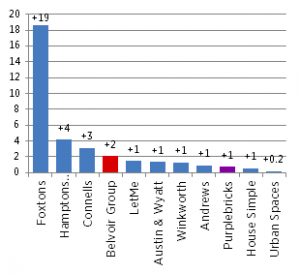 Foxtons: ouch! Caught out spending as the London cycle flattens

On the day of the Brexit vote Foxtons updated the market to say H1 2016 profits would be ‘significantly’ below 2015 and margins fall to about 20%. It is blaming stamp duty and Brexit and a strong slowdown in Q2. It’s hard not to think this is Foxtons getting caught out with the usual story of aggressive investment in growth just as the London property cycle has turned. The CEO states that branch openings (ie investment) may slow – there’s a surprise: as per comment yesterday, they now seem an expensive way to generate leads in a market that’s not doing the growth for you and is moving hybrid/online. H1s this morning came in with profits 30% below on sales 3% below so a margin of 19% vs 29%. The 3p special div Foxtons paid last year was not paid out again – so the interim div is a yield of only c.1%. Despite bullish talk of lettings growth initiatives (apparently paying off as above), still targeting 100 branches in London and growth initiatives in lettings, it’s hard to think that the shares and strategy will be supported on these results. Notably, letting units & revenues were down in H1 which is blamed on ‘intensified competition’ – which is credible but not inspiring if Foxtons isn’t winning the competition – but the commentary was of a  strong fundamentals in renting and bright hopes for PRS contracts. Not a good day for the name but this seems London centric to me with a stronger environment outside.

Not really a surprise as another traditional name that‘s cutting costs and seeing a lot of change but Countrywide has seen a number of senior managers, experienced in traditional estate agency leave. It’s also notable that these are going to sales offices of new housebuilders or other traditionals rather than to hybrid or online. Press rumours are for Countrywide to close up to 200 branches across its network. The latest leavers are the lettings director; national head of land and new homes; the FD of estate agency; national retail performance director; the lettings director of north midlands; and retail directors for the South East & Yorkshire.

Brexit headline: data doesn’t show something that’s too early to be shown

The Nationwide price index showed prices up 0.5% in July which is giving “Brexit didn’t cause price crash” headlines. Clearly nonsense as Nationwide itself says- “too early to tell” especially as the index is built from data at the mortgage offer stage, not completion. It’s transactions where the clearest impact has occurred but otherwise cooling rather than crash or even cyclical turn is most accurate at the moment.

OTM: enforcing its ‘one other portal rule’ as the High Court set to decide by February

Agents Mutual spat with Connells continues. OTM has taken down all listing by agent Rook Matthews Sayer. RMS was purchased by Connells and began listing on all three of Rightmove, Zoopla and OTM, which appears to be a Connells policy. RMS has history as an early OTM supporter and its old owner used to sit on the Agents Mutual board. A second Connells bought agent, Paul Dubberley, listings are also missing from OTM. It seems Agents Mutual is enforcing its ‘one other portal’ even as the case of another Connells agent has gone to the High Court / Competition Appeals Tribunal with a full hearing set for February next year. I’m not a lawyer but guess OTM will lose and the one other portal rule to nulled as a breach of the Competition Act 1998. Presuming that OTM hasn’t refunded the fees to RMS and the others (it needs all the cash it can get to try to fund expansion of a similar service to the other portals) the main beneficiaries will be Zoopla and Rightmove.

It’s an exciting time to be in the industry- big (overdue) changes are crystallising. Have a great weekend